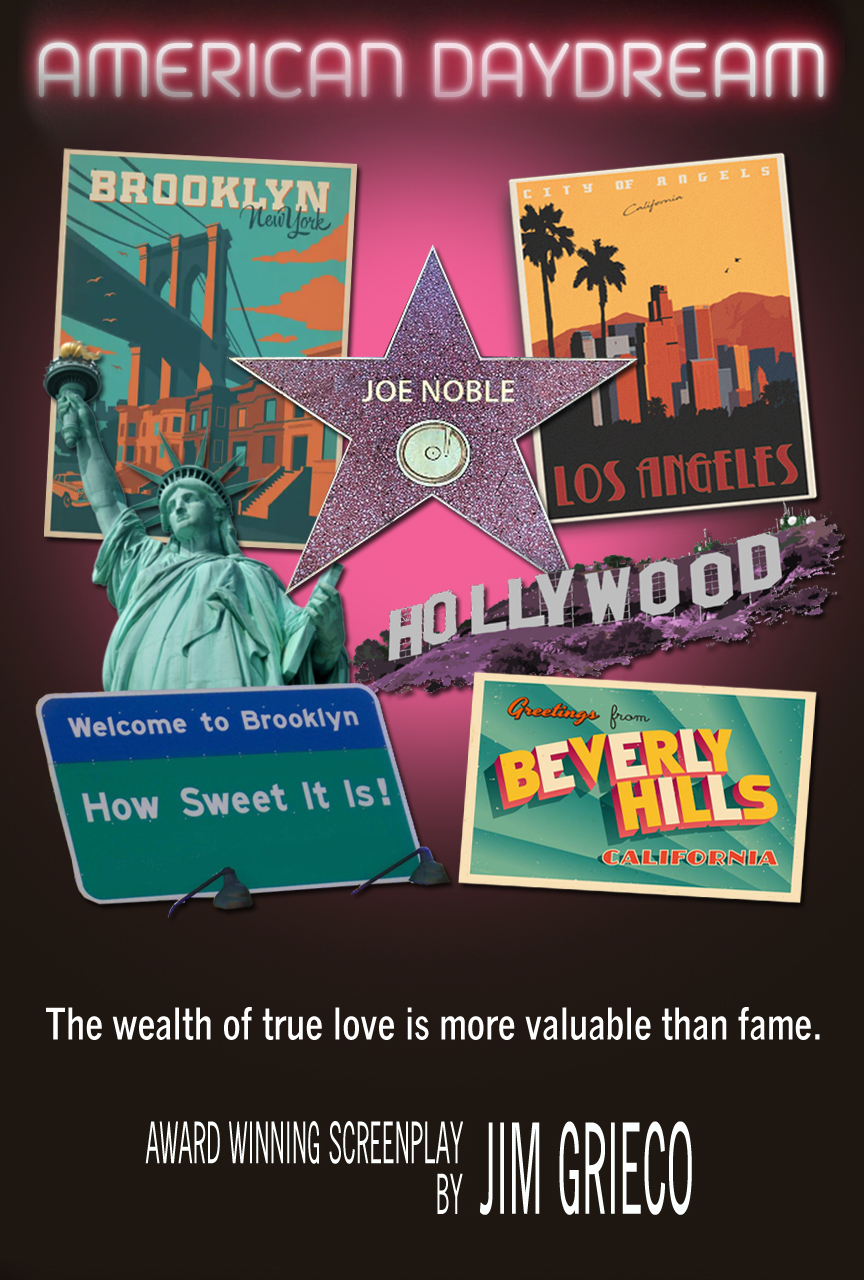 LOGLINE: An up-and-coming singer dreams of superstardom. When a car accident sends him three years into the future, he's overwhelmed by the high price of fame; and discovers the wealth of true love.

JOE GIANCOCCO has stunning good looks and irrefutable talent. Born and bred in Bensonhurst, Brooklyn, he and his girlfriend, CAITLIN, share a priceless gift; genuine affection. Joe's flair for singing and songwriting has led him to the precipice of stardom, leaving Caitlin to wonder if their love will transcend his impending success.

The answer is revealed by a serendipitous meeting with a MYSTERIOUS WOMAN selling wildflowers. Her tattered appearance touches Joe's heart and inspires his generosity. Moved by his kindness, the Mysterious Woman bestows upon Joe yet another gift; the chance to glimpse the imminent life of stardom that awaits him.

A case of amnesia, brought on by a car accident, transports Joe three years into the future, and three thousand miles across the country, where he inherits the persona he so desperately desired...

As Joe struggles to comprehend his superstar identity, Noblemania soon unfolds. Screaming teenage girls are in constant pursuit. On a quest to recover his memory, he treks across L.A. with his biggest fan, WHITNEY BARRETT, a star-struck, sixteen-year-old.

Joe and Whitney soon discover that Joe's life of luxury is filled with strife and controversy. The expense of fame has cost him the most valuable thing in his life; his soulmate, Caitlin. Disheartened by this revelation, he heads home to New York.

Once back in Bensonhurst, Joe discovers his egocentric behavior as Joe Noble has transformed him into a pariah. Defiled by fame, he neglected his friends and family. Desperate to find Caitlin, he seeks out his mother and discovers the terrible truth. He and Caitlin’s relationship failed to bear the weight of his success.

Shocked beyond belief, Joe stumbles outside where a media mob awaits him. He gazes across the street and catches sight of the Mysterious Woman. She blows him a kiss. He passes out. Following a moment of darkness, he awakens in a hospital bed with Caitlin at his side. He’s back where it all began, three years earlier, following his original car accident.

Joe soon learns his glimpse of the future was more than just a fever dream. He watches Whitney win a million dollars on a TV game show. Struck by this epiphany, he decides to reshape his destiny. Joe returns to his humble life in Bensonhurst, rich with an abundance of immeasurable wealth: great friends, a loving family, and his soon-to-be wife, Caitlin. 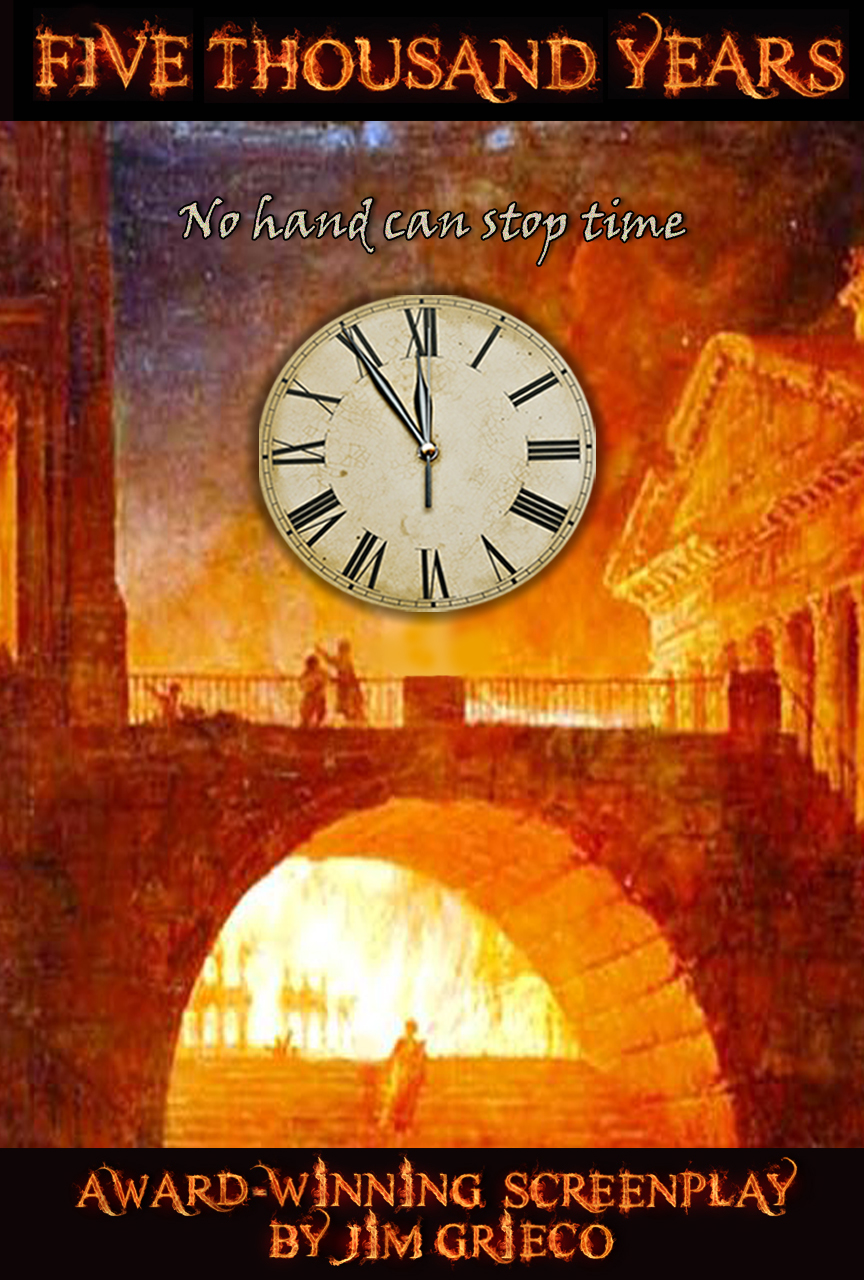 LOGLINE: A Mesopotamian mystic swears an oath to the Queen of the Underworld, surviving through the ages as the instrument of mankind’s demise; destined to bequeath his curse and seal the fate of the present.

Fifty centuries ago, AVETUS faced a daunting challenge. In a selfless attempt to save his wife and child, he consecrated a pact with ERESHKIGAL, the Queen of the Mesopotamian Underworld. Bound by an oath to serve the Lords of Darkness, he lived on in their service for FIVE THOUSAND YEARS. Throughout the millennia, his enslaved hand guided mankind towards catastrophe.

When MOSES urged THE EGYPTIAN PHARAOH to let his people go...
SET, the conjurer of chaos and storms, ordered Avetus to hardened his heart.
When Rome burned...
PLUTO, the punisher of broken oaths, commanded Avetus to set the blaze.
When the Black Death ravaged Europe...
LUCIFER, the Prince of Darkness, forced Avetus to unleash the plague.

The Salem Witch-Hunts... The Lincoln Assassination... The apocalyptic scourge of two World Wars...

Avetus laid his bloodstained hands upon them all.

But In the present day, the end to his seemingly endless life grows near. Aged and weary, he stands before his twin grandsons, JASON and CAMERON CAIN, with an enticing gift. One of the two will inherit his mystical power of longevity. Which brother will live on for centuries and determine the destiny of unborn millions?

A deadly altercation determines the heir... and a haunting twist of fate awaits the victor. 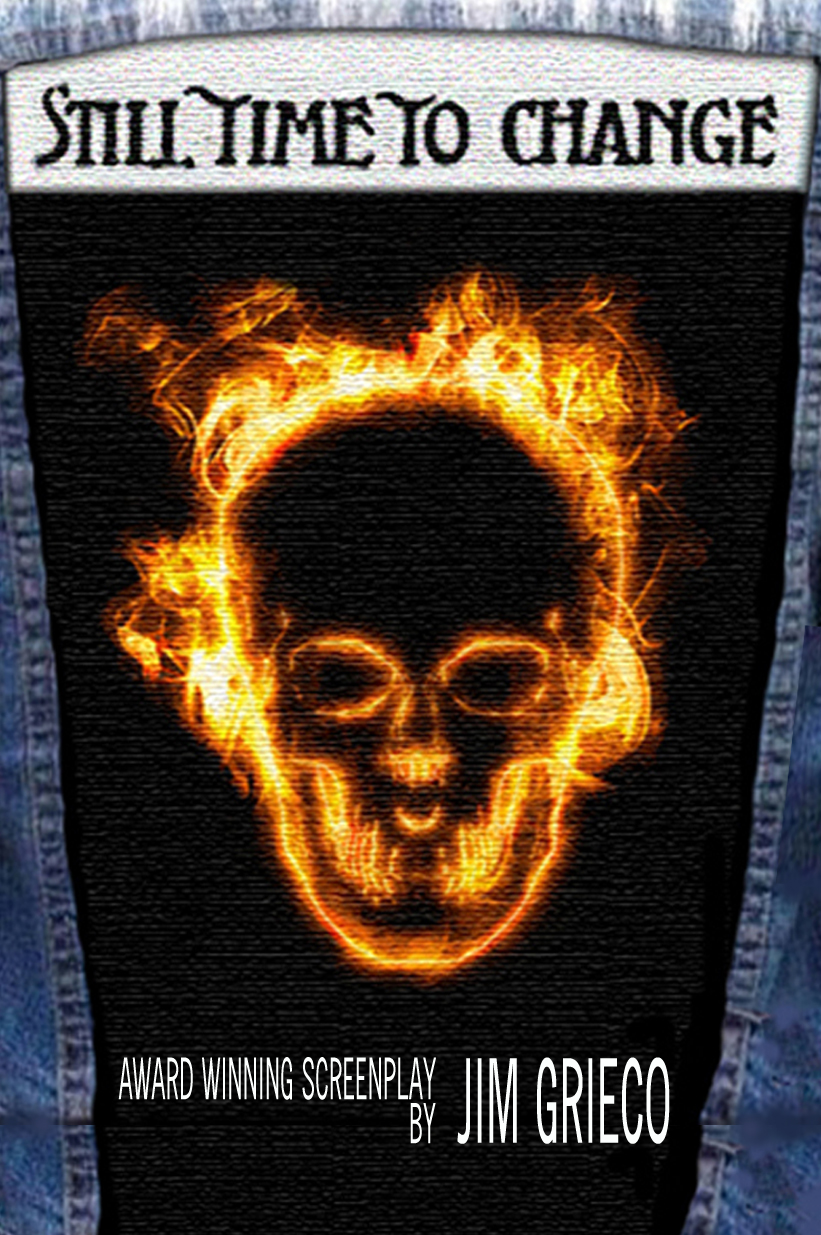 LOGLINE: An impressionable teen takes a transformative voyage through the gritty 1970s, guided by his future self, to the crossroads of self-destruction and self-liberation.

JIMMY stands poised at the edge of his teenage years, unaware of one undeniable fact; his childhood is fading into the past.

As he ventures down the road toward adulthood, Jimmy stumbles in a broken two-step, seduced by a dangerous blend of violence and substance abuse. Drowning in the stagnant suburban sub-culture of 1970s New York, his loss of childlike wonder and changing worldview mirrors the cultural unrest that surrounds him. Pushed to the point of self-destruction, Jimmy reaches a critical crossroads. Inspired by the positive influence of his sister, GABRIELLA, and the spirited words of his love interest, SKYE, he finds the inner strength to change, turning the two-step around.

But you’ve heard this story before. The stereotypical “coming of age” tale?

STILL TIME TO CHANGE outshines the genre with creative re-invention. In-person narration from Jimmy’s future self, JAMES, provides an introspective exploration of the ever-present cultural influences of the period. Expository appearances by James, stewards along a sense of voyeurism; creating a mood that’s both personal and vulnerable. James takes us on an existential voyage through a vibrant era of social change, marked by significant pop culture references, and guided by relevant musical mantras from the period.

Most significant, the universal appeal of “the good guy turned bad, then back to good” depicted in STILL TIME TO CHANGE presents a broader array of meanings; the tale inspires transformation. It makes a timeless statement on self-liberation that transcends the iconic era that birthed it. Moreover, turning towards oneself is an audacious effort, and this TRUE STORY comes from the most in-depth personal place, looking back on a period of revolution, both cultural and personal, with unabashed honesty.

We all must navigate the challenging path the leads from adolescence to adulthood.

STILL TIME TO CHANGE is a unique exploration of that formidable journey. 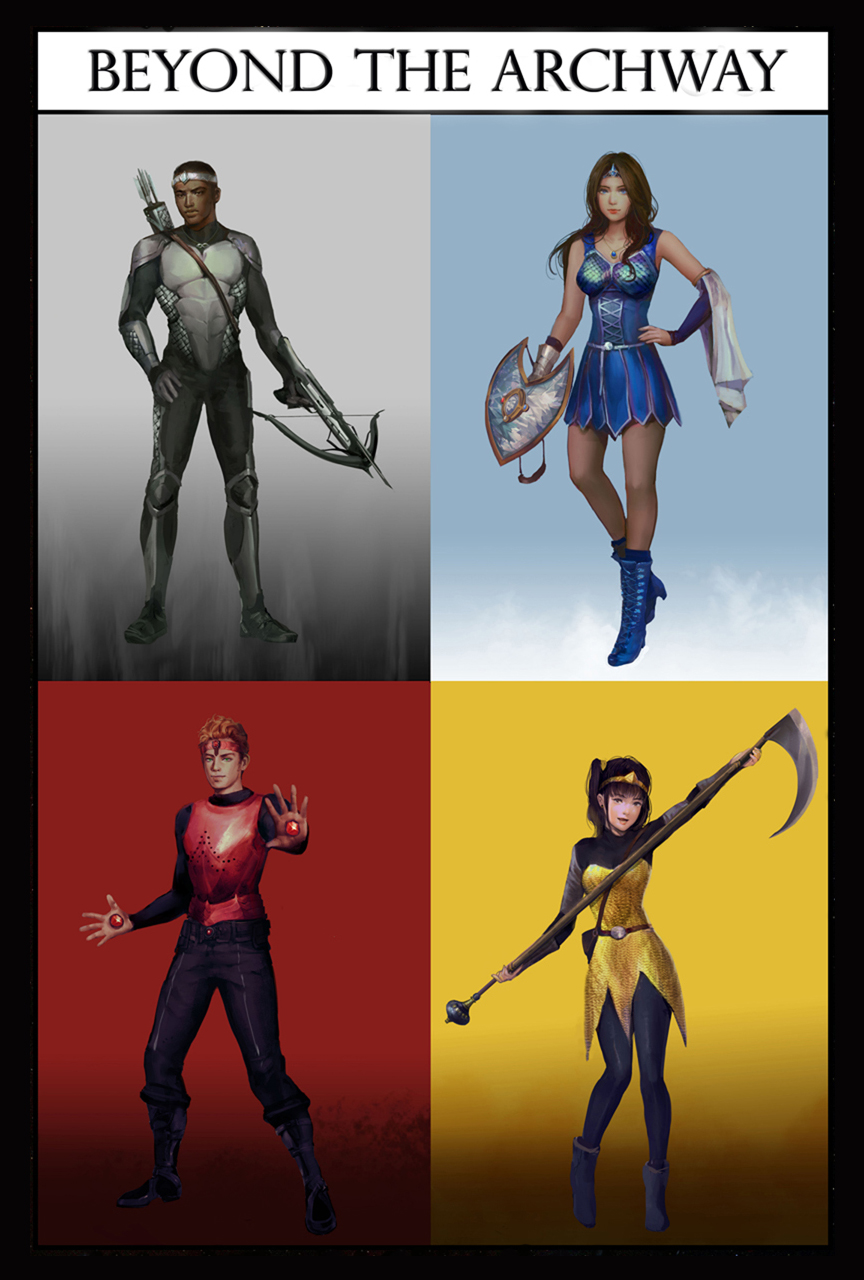 LOGLINE: Four clairvoyant teenagers are drawn into multiple worlds of extraterrestrial beauty. In a race against time, they must rescue an abducted race of humans from an invasion of malevolent underworld entities.

Tahani, Nicole, Josh, and Suki, all come from very different spheres on Earth, but each has a unique gift. From being able to see the future and read other people’s minds to healing the body, their abilities are beyond their understanding.

Following a cryptic shared dream, these four young heroes are led by mysterious spirits on a voyage to Ephaidria, a distant solar system, where their strength, will, and clairvoyant powers are put to the ultimate test.

A community of humans, abducted long ago by an alien race, are in desperate need of their assistance.

Dark entities have invaded, infiltrating their nightmares and consuming the negative energy created by their fear.

They call themselves the Drarbune.

In a race against time, the Earthling quartet must master their paranormal abilities and defeat the Drarbune before they condemn their human brethren to annihilation.

If you're a lover of sci-fi/fantasy, then prepare to be transported . . . BEYOND THE ARCHWAY.